The Massacre of the Innocents (Der Kindermord von Ypern)

In November 1914 the German High Command issued a  press release stating that “young regiments” had overrun enemy positions “west of Langemarck”, singing “Deutschland, Deutschland über alles…” This gave rise to the potent “myth of Langemarck”, of heroic student volunteers sacrificing themselves for the Fatherland and dying with a patriotic song on their lips.

The reality was somewhat different. At the outbreak of war, thousands of young men volunteered in Germany as in the other combatant nations. Some of them were indeed university students or youths in the final year of secondary school, but the volunteers were from all occupations. There were so many that the Army had no place for them, and so new Reserve Regiments were formed. However, these new regiments were not composed solely of raw volunteers – the majority of the men were reservists recalled to duty.

Not only did the Army have no place for the volunteers, but to begin with it had no uniforms, weapons, or equipment for them. This would not have been a problem but for the situation on the Western Front, where Germany’s plan for a quick victory was failing badly.

In early October 1914 the Chief of the General Staff, General Erich von Falkenhayn, took a desperate gamble. He formed the new regiments into a new Fourth Army, and sent them into battle around Ypres. They had had six weeks of inadequate training, and faced well-trained Belgian and French soldiers, and the highly professional British Expeditionary Force.

The young volunteers fell in appalling numbers. There was no easy over-running of enemy positions – when they were taken it was after days of carnage. As to whether they sang as they advanced, the truth or otherwise of this has never been established.

There is no doubt, though, of their tremendous courage and willingness to stake their lives. Many attacked again and again as ordered, even when they knew what the likely result would be.

Falkenhayn’s gamble did not pay off. There was no victory in the West, nor would there be. In Germany the futile loss of so many young lives became known as the Murder of the Innocents. 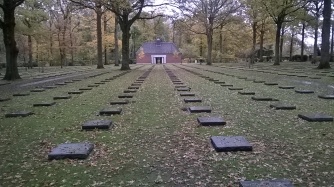 Over 25,000 of the dead from the fighting near Ypres lie in the German Military Cemetery at Vladsloo. They are watched over by Käthe Kollwitz’s sculpture Die Eltern (The Parents). The grave of their son Peter, a young war volunteer who fell in October 1914, is near them.

There are roughly 18 men under each of the gravestones, and only some of them are seen above.

A further 44,000 German soldiers lie in the nearby cemetery at Langemark, 25,000 of them in the mass grave in the left-hand picture. At the cemetery entrance is a small wood-panelled room dedicated to the student volunteers who fell near Ypres in autumn 1914.